I created the word Disposophobia in 1980

Why Should You Listen to Me? 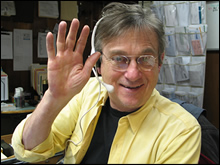 In 1980, I discovered a 75 year old retired social worker, known as a “hoarder.’ She lived in a high rise apartment building in New Yrok City.

The tenant above this hoarder, had a massive leak. Water rained down on her apartment and several below.

It took me from 1980 to 1995 to learn from my clients, the only way to help them recover their lives, over a period of time. In November 2000, MSNBC filmed a documentary on my company, the DISASTER MASTERS®. This documentary showed one of our thousands of clients that have failed to take good care of themselves.

This one show is the genesis of BBC Life of Grime, New York. Reporters documented my staff and I, over a 3 month period in NYC.

Only one of my clients was allowed to be filmed in this series, as she was a victim of her husband’s behavior. BBC Life of Grime NY was the number one television series in the UK for two years.

Dozens of aggressive TV production companies, including Oprah and Dr. Phil, banged on my doors, wanting to expose hoarders as ugly and freakish. Because that makes great TV on the OMG networks.

Since then, the Disaster Masters®, have restored over 5,000 individuals and families from a life of clutter. We also coached them to manage their possessions and their lives.

Therapy Does Not Help Hoarders

Throughout time, we have recovered hundreds of people, who had been in therapy for years. Therapy did not “fix” any of these clients. 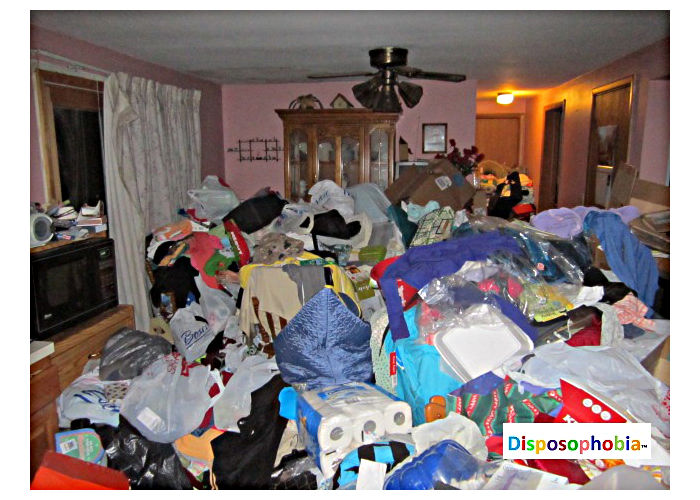 Disposophobia is the Fear of Getting Rid of Stuff.

The National Institiute of Health and American Psychiatric Association call it a “hoarding disorder.”

People with hoarding disorder excessively save items that others may view as worthless.

They have persistent difficulty getting rid of or parting with possessions, leading to clutter that disrupts their ability to use their living or work spaces. Not according to the NIH.

The hoarding is not better explained by the symptoms of another mental disorder (e.g., obsessions in obsessive-compulsive disorder, decreased energy in major depressive disorder, delusions in schizophrenia or another psychotic disorder, cognitive defects in major neurocognitive disorder, restricted interests in autism spectrum disorder). Disposophobia and Hoarding Are Deadly

Stacks of books and magazines trapped Patrice Lumumba Moore in his Bronx, NY apartment for two days. Neighbors and the Fire Department rescued him.

Ben McGrath interviewed Moore in the hospital for The New Yorker magazine.

Books were falling everywhere, and I tried to catch some – that’s where I cut my knees.

I had crates up top. Had my books in crates – you know, them metal crates. I’m lucky I was standing up. If I was down, I’d have been crushed. So I’m a lucky guy.

It starts in the head of the people and manifests somewhere on the floor and on horizontal surfaces in their dwelling units. It starts with one pile of garbage.

Victims live in a small space, because their spouse filled their cluttered residence with hoarded possessions.

I have witnessed hundreds of spouses who are the victims of their husband or wife’s behavior. Hoarding and clutter causes depression and isolation.

However, they enable their spouses to continue cluttering.

A guy’s wife left him. She moved out of the house because the bed couldn’t be used, you know, for its intended purpose. Ron Alford

What doctors do for broken bones and stuff, I do for people who suffer massive clutter.

Therapy Does Not Cure Hoarding / Disposophobia

I will pay a $500.00 Reward to the first person that can show me that therapy cures a hoarder.

How to Help a Hoarder / Disposophobic

I receive thousands of phone calls and e-mails from people who are friends, relatives or victims of a Disposophobic. Everyone wants to know them what they can do to help the hoarder / disposophobic.

The relatives and neighbors who contact me, are in more pain than the disposophobic.

Many questions – one answer. You cannot fix a hoarder.

The fixing must come from within the Disposophobic.

In most cases, friends and relatives enable the disposophobic’s behavior.

If you can get the disposophobic to contact me and ask me for my help, I can help them.

If they do not contact me – nothing will work.

Drugs will not work. Psychotherapy has never worked.

Going into their home and cleaning out the place, while they are out, or under protest will not work for long.

The change in thinking is the key to long term and meaningful success.

As far as I know, there is no person or firm anywhere in North America, that has over 30 years of experience dealing with these people, or anyone who has a record of accomplishment such as mine.

For those who do speak to me, I have a 85 percent chance to provide the disposophobic with a new and better way to live. They will not feel any loss in the process.

About 15 percent of the time they don’t want to hear what I have to share. These people never follow through.

I have a 100% success record with disposophobics who contact me, ask for my help, and then follow through. 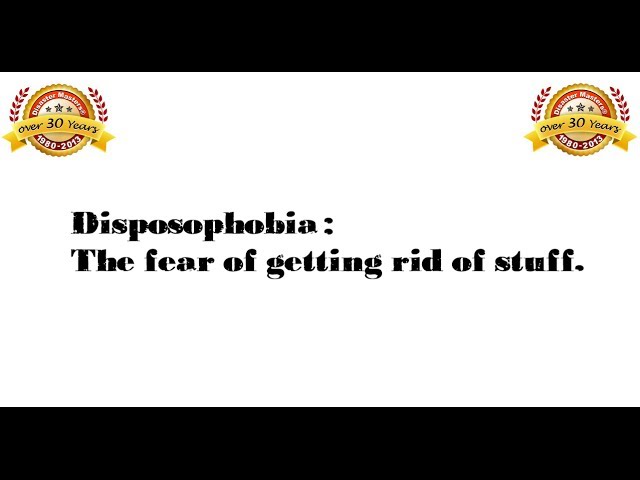 Disposophobia and Ron Alford in the News

Hundreds of radio and television shows invited Ron Alford to discuss disposophobia, hoarding and Disaster Masters. Additionally, many newspapers and magazines interviewed the man who invented the word disposophobia. These are a few samples.

At 8 AM on a sunny Tuesday morning I am on my way to a crisis site on East End Avenue at 82nd Street. The call had come in an hour or so earlier…

He met Ron Alford, otherwise known as the Disaster Master, for his prowess in clearing the homes of extreme cases. Mr. Alford prefers the term “disposophobia” to describe the engine of hoarding, and he invited Mr. Yourgrau to tag along when he and his team cleared out the apartment of a hoarder…

A Hoarder’s Tale of Redemption

We kept everything of value to the client. Often, however, clients ask for a ball of cat hair but forget about legal papers. They can’t make value judgements. I do that for them…

Ron Alford of Disaster Masters® is featured on the MSNBC show Captured.

Alford had recently returned from an emergency decluttering mission in San Francisco. “A guy’s wife left him,” he explained. “She moved out of the house because the bed couldn’t be used, you know, for its intended purpose.” Now, thanks to Ron, the couple was back together.…

Between 2003 and 2005 Michael Schmelling photographed a number of residences in the accompaniment of Disaster Masters®, a New York-based company that specializes in cleaning homes and counseling hoarders. Facing eviction, health hazards, and family interventions, the owners of these homes were unable or unwilling to get rid of the things they had accumulated. …

“I had never seen anything like it,” recalls the 13-year police veteran. “The house was thoroughly packed—stuffed—with clothing items in every room, from floor almost to ceiling. We could only open the front door far enough to squeeze in…”

Inside the World of the Compulsive Hoarder

“We carted out a 30-yard dumpster full of those bottles,” he days. “But is that hoarding? No, it’s cluttering.”…

Alford’s initial goal for the day is to come up with an estimate for Julie’s cleanup, but he’s also interested in “fixing her brain,” as he tells me later…

Although most of can cope with a bit of mess, in our homes. When it gets out of hand you need help from Ron Alford…

A Life Of Grime New York

Out of control hoarding. You think, “Wow! Why am I doing this?”…

Michele Gitlin has 700 sweaters. In touch with the pain as well as the pleasure of over-collecting, she calls Ron Alford, the “Disaster Master,” for help. Ron, a de-cluttering expert who coined the term “disposophobia” and believes that “clutter begins in the head, and ends up on the floor,” determines that Michele is indeed a hoarder…

Kris Montag introduces the owner of Disaster Masters, a company specializing in crisis management for hoarders whose collections have created serious health and safety problems in their homes.…

Our next guest says nothing shocks him anymore. Ron Alford is a self proclaimed Disaster Master. He’s here to share some incredible stories and some tips…

How did he get so much into a 10 by 10 space without an organization system from Hold Everything or the Container Store?…